If Web Design was Photography is Social Media the Talkies? 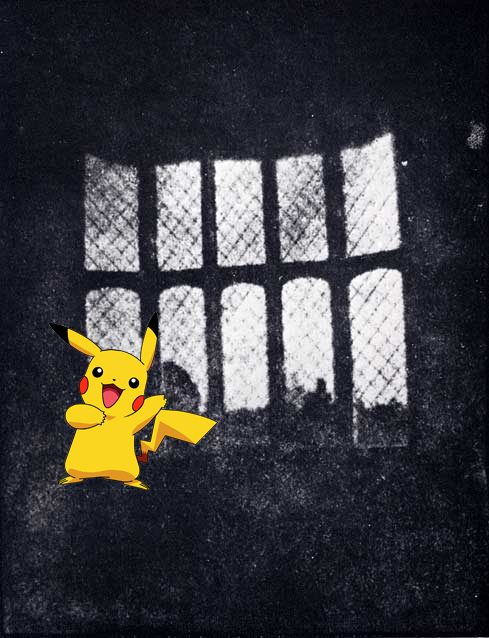 When Henry Fox Talbot started his photography experiments in 1835 just down the road from here at Lacock Abbey in Wiltshire, he had no idea of where it would eventually lead. This image is credited as being the first ever photograph, Pikachu was not in the original.

When I was a student we were given an essay to do based on a quote that "from today painting is dead"... Which wikipedia tells me is from Paul Delaroche after seeing a daguerreotype, one of the earliest forms of photography. It's a very forward thinking approach but we can see that painting is very far from dead, but also very far away from where it was in 1835. We were also told at college that the big battle paintings of the nineteenth century were the blockbuster movie​s​ of their time, ​complete with ​massive budgets, overblown pompous misrepresentations of the facts, the works.

Let's look at the progression of photography from the first experiments here in Wiltshire to ​computer generated 3D blockbusters we have now. First came grainy sooty images which you could only just make out, but they were mechanical impressions of the real world and people were stunned. Gradually the quality got better until we had crisp black and white photographs. The next step was to make them move. Early movies were novelties in themselves and portrayed scenes like a train arriving at a station. People were amazed even to see a twenty seconds clip of smudgy motion. It was magic. Gradually the scenes got longer, the quality improved and people began to tell stories.

Some time later caption cards were introduced to explain the action, pianos were brought into theatres to add a soundtrack and sound effects. Movies experimented with even longer formats. This is the era of Charlie Chaplin, Laurel and Hardy and Harold Lloyd, genuinely funny and were made with the simplest of technical systems.

Pretty soon people figured out a way to add synchronised sound to movie film and overnight the movies became the talkies. Many stars found the transition too hard, or had terrible voices. Or couldn't act - or hated the whole thing and wished we could stick with the pure form of the silent age. But technology marches on and time and tide wait for no man - next up comes colour. When colour was first introduced it was expensive and not very good. They were several different systems to produce lifelike colour some of which looked quite odd. The Wizard of Oz shows this quite well, the beautiful soft black and white footage switches to garish unreal colour to great effect. That's a good example of old technology working well while the new stuff is still quite buggy, and yet we still lust after the novelty of the new.

From the Wizard of Oz we then have a few decades of steady improvement. Nothing changed dramatically, but by the late 70s we get Star Wars, similar to the Wizard of Oz, but light years ahead in terms of production values.

The next step from there comes from computer games, which have been through their own rapid evolution. 3D animated features have come a long way since Toy Story and now seem hard to distinguish from real life. Special effects movies are more like computer games with bits of cinema added. It's getting difficult to see where the effects end and real life starts. And the next step will be for this whole 3D universe to be immersive as virtual reality is set to take the world by storm in the next year or so.

The Future of the Web

That's quite a journey from a sooty picture of a window in Wiltshire to a virtual reality version of a Hollywood blockbuster, but it demonstrates what is possible. My question is, where on the scale of sooty images to VR is the current state of the internet? It took photography 100 years to get to Star Wars, the internet has been around half that time, are we at the talkies stage yet, or do we still think that caption cards are cutting edge stuff? The early days of the internet were very similar to people's amazement at a grainy photo, the very fact that I can chat with somebody in Vietnam over MSN messenger is entertainment enough - but soon the novelty wears off and more creative uses of the technology come along.

The internet started out with very basic technology and has since expanded massively firstly with the world wide web and more recently with smartphones and tablets. The next phase of the internet is going to be driven by the enormous amounts of data being ammased by google, amazon, facebook and apple. The data is also getting put back into the real world with the augmented reality of Pokemon Go - and the access to huge amounts of information is also changing politics, the rise of populist parties is driven partly by greater knowledge. But the collection and interpretation of data is still in it's infancy. Devices become more sensitive and accurate, reporting gets more streamlined and widespread and our "phones" turn into tiny data gathering cells all connected to a giant supercomputer. It sounds like science fiction but it is here now.

Jeff Bezos says that we are still at day one, he might have a point, maybe the current internet is just the grainy Wiltshire photograph. What will happen next?

What about virtual reality?

What about virtual reality?